After the big Crash at Silverstone the car is back to its former glory and is looking great and can be seen testing it a week before the race showing that all seems to be ok with the suspension !

We headed up to Cadwell Park Saturday evening to prepare for the following day in a chilled and relaxed way. After a good clean and polish…..The Car went through Scruiteneering and Noise testing without problems and looks better than ever !

Practice/Qualifying
I like to get out early for practice as it’s nice to get some clear race track in front of you as it’s so important to get a good qualifying time. I was on fresh tyres so I had to take it easy for a couple of Laps to scrub them in and get some temperature in them. Plus the car had a Major rebuild and Cadwell park is not the most forgiving place as its very narrow and there is little room for run off !

Qualifying went well, it had also been 3 years since I raced at Cadwell and I managed to get the car on P3 in class.

With all the V8’s in the race we were a little down the field but still high up for our class so we were mixed in mid field …., the red lights went out and I made a great start and gained a couple of places off the line then I came upon one of the V8’s with a transmission problem that was coasting down the outside of the track so I had to slow down to avoid running into the back of him and lost several places because I became boxed in ….arghhh

We settled into the race it was pretty busy and frantic out there with some people getting a bit excited and champing at my tail, there is no time to relax at Cadwell Park its full on racing all the way around, being so narrow its very difficult to get past the others on the bends and we didn’t want to swap any paint with Anyone !

Therefore after a couple of attempts at passing the FIA car of Mike Harris running in P2, which did work as my car is better in the corners  his extra power on the straights he was able to keep his second place and we all finished the race settling for 3rd place.  However with just 0.56 of a second between 1st and 3rd place it was a very close and exciting race to the end.

The car felt great and as ever the engine temperature was as steady as a rock thanks to the Evans Power cool 180.

Currently the Evans car is leading the BCV8 leader board , next race is a double header with the Classic sports car Club  24th August  Donnington Park 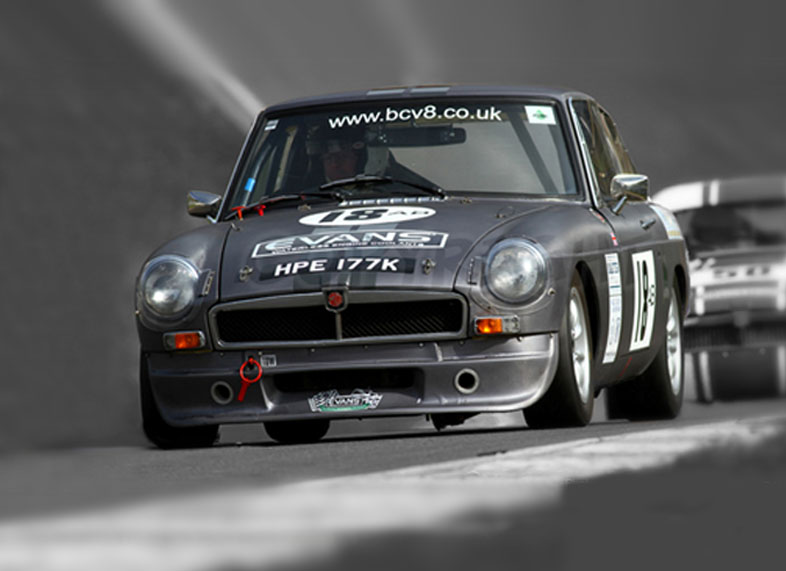