Kamaz-Master team has been around for over 15 highly successful years in the world of motorsport. They are Russia’s premier national off road rally raid team representing Russia in motor racing around the globe.

The team has been under the leadership of Semen Yakubov since the beginning, an outstanding businessman, great manager and all round enthusiasts for motorsports.  He has developed and mentored Kamaz into being the strongest and most successful sports truck team in the world. In 2011 Kamaz became the winner of the Dakar Rally for the 10th time, and they’ve been winning international rallies all over the world since 1988.

The name Kamaz is derived from the name of the local river Kama, which the city Chelny lies on and is the location of the team’s HQ.

The Kamaz truck is a specially built 4x4 truck and was designed to be a cargo delivery unit operating in regions of difficult and extreme conditions. The truck has the ability to operate in climate zones with temperatures that range from -30 through to +50 degrees. The truck is a strong well built vehicle which has a high performance and is suitable for extremely bad off road environments, which make this the ideal vehicle for endurance rallies.

One of the legends of the Kamaz team is Vladimir Chagin who has accumulated 63 Dakar wins during his career so far. He has finished in the top three throughout his career with Kamaz. He posses’ driving skill and ability not seen in other drivers around the globe, and it’s this which has helped him to become the legend he is. In 2011 he won the Dakar Rally for the 7th time an achievement not surpassed by any other driver.

Earlier in 2012 Kamaz started to test Evans Waterless Engine Coolants in their trucks, and used the coolant during the Silk Way Rally.

The 4th Silk Way Rally began in Moscow on July 8th with a starting line up of a 100 cars and 20 trucks all competing over a challenging routs of 4000 KM, featuring 2092.64 KM of timed sections to become the 2012 champion.

Contenders included Dakar winner and 5 times World Rally Raid Cup Champion Jean Louis Schlesser making his debut in the SWR. Another very promising contender was Lucio Alverez driving a Toyota who managed to finish 5th in this year’s Dakar. In the truck category Ales Luprais puts his title on the line against the likes of the mighty Kamaz factory entries, which includes the 2010 winner Eduard Nikolaev and fellow Kamaz driver Ayrat Mardeev who finished 5th in the truck category in this year’s Dakar.

The race will consisted of seven special stages on a route that is 70% new this year. With very little between the excellent competitors this should become an exciting battle for the 4th Silk Way rally.

Stage one saw the driver’s race through the central Russian Countryside, with rolling and zig zagging tracks round lakes and rivers. Once past the Bouzoulouk River the landscape become similar to the African savannah with tracks becoming more difficult to find, which will push the skills of the co-drivers.

Further on the stage drivers had hills and valleys to contend with, where the track gets faster and can catch some drivers out. Other landscape features included a sand zone with a mixture of sand dunes, hills and forest sections.

Kamaz driver Eduard Nikolaev won the first stage of the truck category, finishing in the city of Volgograd with a time of 3hrs and 55 seconds. Nikolaev finished some 5 minutes ahead of previous winner Ales Luprais from the Czech Republic. In 3rd place was Ayart Mardeev finished approximately 1 minute behind Ales.

The rally was initially supposed to have been over 6 arduous stages but due to flooding and the death of 170 people in the Krasnoder Region it was decided to reduce the race down to 5. Eduard Nikoleav led for most of the race, but just shy of the finish line by 40 kilometres he was stuck in swamp and suffered a steering gear failure, which allowed Kamaz driver Ayart Mardeev to thunder past and take 1st place. Eduard finally finished a respectable 6th, with fellow driver Anton Shibalov taking podium in 3rd place. 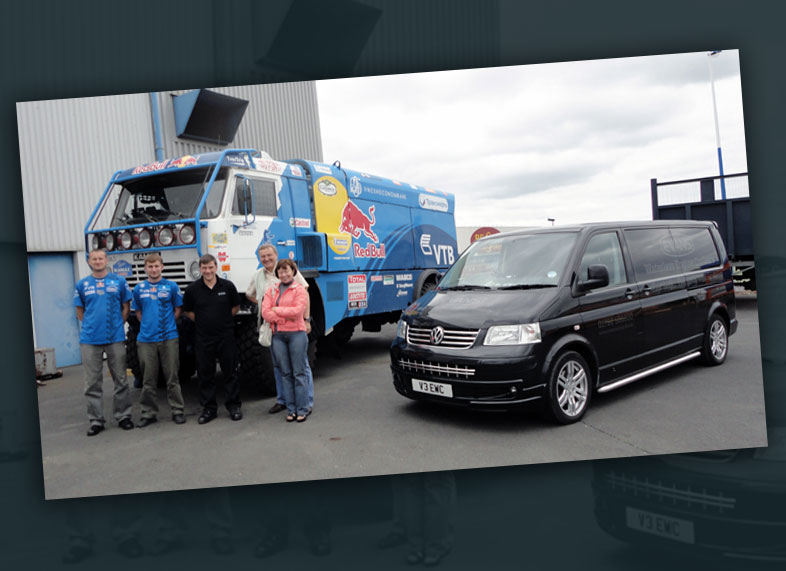